Pepatián is a 30+-year old non-profit arts organization in the South Bronx dedicated to creating, producing and supporting multi-disciplinary contemporary art by Latinx and Bronx-based artists. Now in its 35th year, we have PLENTY to celebrate ! http://www.pepatian.org

What We Need & What You Get

~ production costs for Out of La Negrura/Out of Blackness in the Bronx: A Choreographic Collaboration Across Diaspora documentary film with artists Sita Frederick, Ana “Rokafella” Garcia, & Marion Ramirez.

Your support is invaluable, thank you!

Perks include shout outs on Facebook, credit in program,  listing as benefactor on Pepatian’s website, free tickets to upcoming dance shows, DVD of new documentary film, Out of La Negrura/Out of Blackness in the Bronx: A Choreographic Collaboration Across Diaspora, including bonus videos AND Pepatian t-shirt.

Enjoy these photos from my stroll around Harlem in January!

As a life long Bronx resident I am elated and proud to have curated an exhibition that celebrates my West Indian heritage. With the support of BXArts Factory and hosted by the Montefiore Fine Arts program ArtViews gallery, the exhibition is on view through early October at Montefiore Moses Campus, 90 East 210th St. Bronx, NY 10467.

The West Indian population of the Bronx, NY is 8% or 106,000 people from various islands lying between southeastern North America and northern South America bordering the Caribbean Sea and the Atlantic and comprising the Greater Antilles, Lesser Antilles and Bahamas.  The largest event in New York City that celebrates and honors Caribbean culture, arts, history and traditions is the West Indian American Day Carnival, which is comprised of week-long festivities and a grand finale. The grand finale Carnival reaches over one million people in attendance during Labor Day weekend with participants and tourists from all over the world.

Reflections: Celebrating 50 Years of the West Indian American Day Carnival celebrates and honors the history of the Caribbean carnival by reflecting on the West Indian population in the Bronx, NY and noting their impact and long-lasting influence on their community and NYC. Through the lens of 5 Bronx-based photographers, the vibrancy, tradition and impact of West Indian Americans are captured by the photographs on display. Artists Trevon Blondet, Ijeoma D. Iheanacho, Jonathan Joseph, Omesh Persaud and Harri “Indio” Ramkishun each take on a subtheme of inspiration from the West Indian community. Together the photographs share the energy and strength of the West Indian population and the groups influence to the political, economic and cultural vitality of the North Bronx. 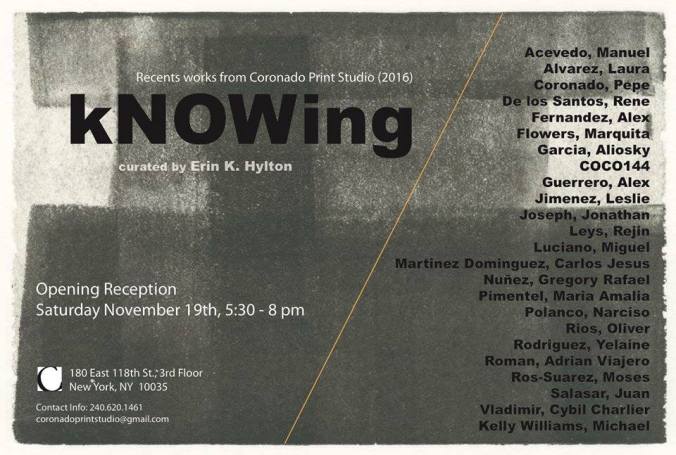 Save your holiday shopping for the Bronx Museum’s Holiday Market Weekend! In collaboration with FromtheBronx.com, The South Bronx Farmer’s Market, The Point, and The Bronx Beer Hall, the Bronx Museum welcomes more than 20 local artists, artisans, farmers, bakers, brewers, and more for a holiday market that is not to be missed. The evening ends with a popular holiday themed flamenco performance by dancers from Flamenco Vivo Carlota Santana II, an annual Bronx Museum tradition. Free admission!