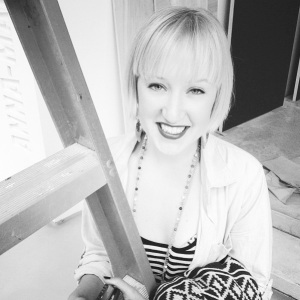 Fiona Mahurin is a Global Studies student at the New School bound to graduate in May. She has studied and conducted field work in Cambodia on the topics of the history and politics of education and development, and most recently with Khmer Exiled Americans who were deported from the U.S. after completing prison sentences that they began as youth. After graduation, she intends to continue her research and collaborate on a multi-media exhibition with deportees exiled in Cambodia, that highlights their absence in order to address the U.S. immigration and prison systems.

On the current show, Cambodia: Drop by Drop you will Feel the Water:

“Cambodia: Drop by Drop You Will Feel the Water is a multimedia exhibition exploring historical and contemporary relationships between Cambodia and the world with a particular emphasis on its ties to the United States. Maps, photographs, drawings, video recordings, installations, and fieldwork narratives from student work across the divisions of Parsons and Lang in the Anthropology of Development, History and Politics, Architecture, and Urban Design and Ecology thread together interdisciplinary connections that highlight a fluid and changing country. Coinciding with Season of Cambodia, a Living Arts Festival in New York City, this exhibition hopes to spur curatorial dialogues that engage with the communities of The New School, the larger New York area, and the visiting artists from Cambodia.” 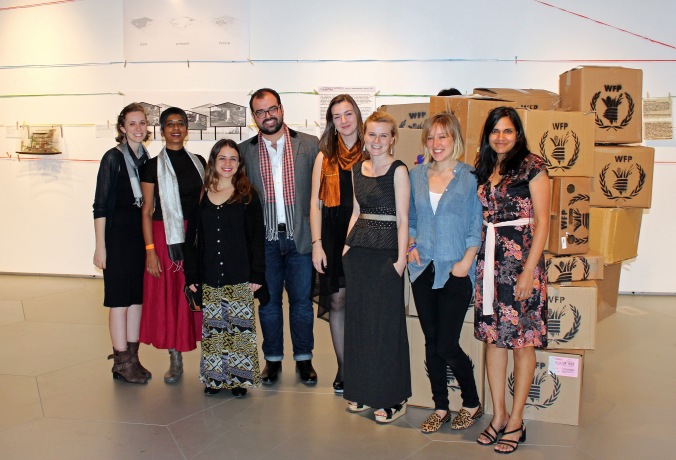 The face sculpture and spoken word recordings, exhibited in the gallery, together represent the beginning of a collaboration between Fiona Mahurin and Khmer Exiled American poet, Kosal Khiev that will touch on themes of absence, identity, walls and borders, and technological pathways to publicly address the unjust policies and practices produced by the U.S. immigration and prison systems, by way of collaborative art making, storytelling, and spoken word. Khiev was deported to Cambodia in 2012 under a repatriation agreement signed in March 2002, whereby the U.S. held secret negotiations with Cambodia and pressured the country through threats and bribery to permit entry of ten deportees per month. Today, the removal processes of Cambodian refugees is a systematic operation taking individuals, who have already served time within U.S. borders, away from their families, their children, and their communities without considering individual cases before a trial. Born in a refugee camp in Thailand, Khiev’s deportation order was the first time he entered Cambodia. 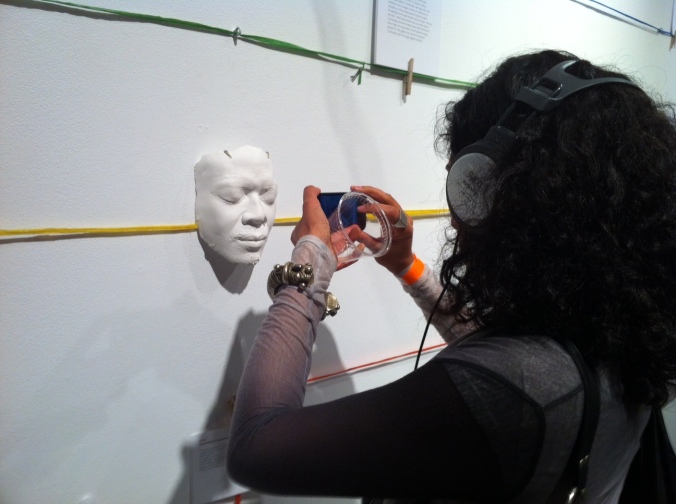 On the film in the pictures:

Why I Write is the first episode of Verses in Exile, a spoken word video series produced by Studio Revolt in collaboration with Khmer Exiled American poet, Khiev Kosal. Through his poetry, Kosal reclaims his place in the world as a free man— a step that begins in Cambodia, not America. In the works, is a feature-length documentary, Cambodian Son: http://www.indiegogo.com/projects/cambodian-son 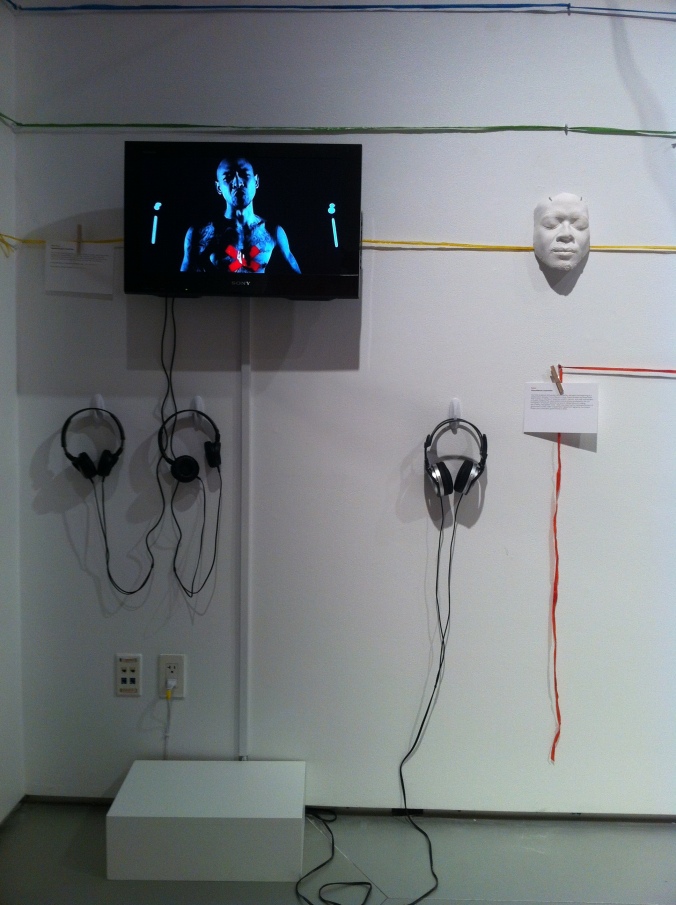 Stories. Barriers. Absence. Artifacts and objects. Conversations with my peers and professors during seminar at the New School, the gravity and sheer injustice of this topic, the tremendous talent and power of Kosal’s poetry, my friends and city that push boundaries and challenges conventions with creativity. As I’m about to graduate college, it’s helped me to realize there are so many mediums through which to execute my learning, and making art is something that I have always thrived off of. Since I had never pursued art in an academic setting, the curatorial workshop helped me to explore how I might combine what I once saw as disparate fields. New York offers opportunity to create dialogue, and the work in the show hopefully invokes that to the audience. It questions issues we don’t experience every day.

2. What do you place artistic value in?

Narrative and storytelling is a very powerful way to elicit common ground. Incarcerated youth and deportees are often dehumanized in the system and media. Connecting to an audience in a way that humanizes the issue is central to the value I place in art. I also find it extremely important that I recognize and utilize my positions of privilege and points of access in order to realize this project. This includes my citizenship status. Kosal cannot be here. Unless the laws change, he and thousands of deportees exiled in Cambodia will never return. How can you possibly collaborate on something as hands on as art, with someone who cannot physically be here? How can he tell his story to a New York audience? This is both a part of the concept and the challenge.

It is also really important to me that the work is widely accessible and not confined to white-wall gallery spaces. This is why I want it to occupy public spaces with a lot of movement. I want to make what is invisible visible. We don’t see what exists behind prison walls and national borders, and so it enters dialogue in a contrived way. It needs to be seen, heard, and put it on the street, by people who have experienced it on the inside. 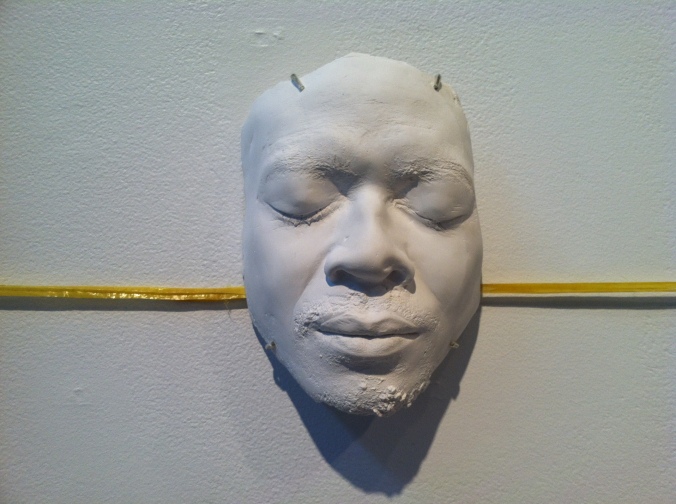 3. What would you like people to take away from the exhibition?

Art has an ability to reach people in different way. I want people to take away the raw emotion. People can interact on a very personal level with the pieces, even touch his face if they want and listen to his voice. As an artist, I want to physicalize concepts in ways that are viscerally felt. Have the pieces wash over the audience but be poignant to stay with them.

My goal, through my work, is to invoke dialogue and encourage visitors to question their own assumptions of the deportation of Cambodian refugees and humanize their stories. I believe that narrative and storytelling are very powerful tools elicit common ground and expose the historical context of U.S. foreign policy with Cambodia, which has continually concealed and remained unaccountable for acts of violence, banishment, and separation of families. 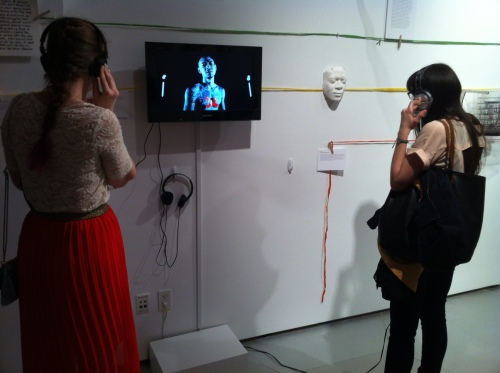 4. What can people look forward to?

The curatorial workshop provided me an opportunity to experiment with my concept, and see how visitors engaged with some of the material, so that I can take it further. Kosal and I are collaborating on a sort of exhibition, performance, or street installation where the featured artist doesn’t show up because they have lost their right to be here. I want to pose to the audience, if you can’t legally bring back a person’s physical body, what can you bring home in order to humanize their story and personhood? So far we have objects like body castings, journals, sketchbooks, immigration documents, photographs and recordings. As a long-term goal, I hope that its impact will reach beyond public awareness and toward informed political action that is grounded in social justice.

5. How can people get in touch with you and/or any artists in the show?

For questions regarding Drop by Drop and future projects on the deportation of Cambodian refugees, please email: fionaivy@gmail.com

Live life on the edge, with the arts of course!

2 thoughts on “Interview with a Curator: Fiona Mahurin”